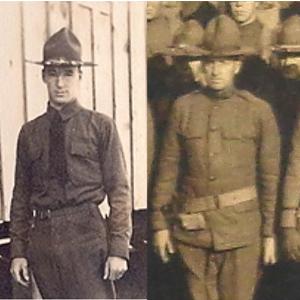 We need your help!

Michel Boquet is a retired French engineer who has provided a lot of information used in this blog.  He has acquired a picture of Poppa’s battalion and is trying to identify the soldiers pictured.

Mr. Boquet is suggesting that Poppa is at the far left of the bottom row.

Here is a comparison picture.

Here are Poppa’s Journal entries for this week in 1918.

Sunday August 11, 1918– Twentieth defeated the Tenth today in baseball at city park  12 to 6. Not nearly so good a game as that played on February 22.

Monday August 12– Mac, Schroeder and I took a walk this evening and while in suburbs of Dax an old man called us in to drink some wine with him.  He was old and crippled and had not seen many Americans. He was very happy to have us and we felt the evening well spent.

Wednesday August 14– Am working on maps everyday.  Getting very tired of my job as draftsman and would welcome a change.  Letter from Jamie today.

Saturday August 17– Rather great day.  Went to casino in evening.  Inspection in the P.M.

Presumably Poppa is referring to his older brother Hugh Clancy Jamieson who was called Jamie.  we knew him as great uncle Clancy.  Clancy also served in the U.S. Army during WWI. It appears that he served in the states as the only address for Clancy  in Poppa’s journal is Camp Grant, Rockford, Illinois .  An article published in the (Madison) Wisconsin State Journal on Oct 15, 1917 indicated that “the Madison Boys in Company I want a Victrola to pass the time…”   According to the article the Victrola should be sent to Uncle Clancy at Camp Grant which was on the outskirts ofRockford Illinois until, 1946.

Next week:  Band Practice Every Monday and Friday