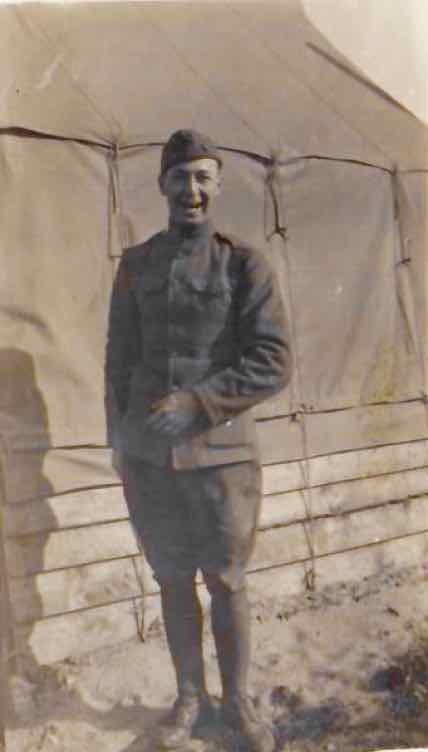 Background:  WWI  has been over for over 4 months and the soldiers of the American Expeditionary Force are being sent home from France.   My grandfather, John Rodney Jamieson, who we later called ‘Poppa’, has spent the past few weeks in various camps near Bordeaux, France.  He is anxiously awaiting his orders to head home.   Here are the journal entries he wrote one hundred years ago this week.

Sunday March 30, 1919– Rained all day.  Barracks leaks badly. Took bath, read, wrote letters just to put in the time.  Went to church at Y. this A.M. First service I have attended for months.

Monday March 31– Still raining.  Read, wrote and did nothing this A.M.  Went over to other camp to visit the boys this P.M.  Very blue place over there. All sick of laying around waiting.  Think of me with months ahead. Several letters came today.

Tuesday April 1 – April starts out bright, clear and cool but shortly after dinner it’s rain again.  Was in Bordeaux all P.M. and evening, sat in front of the fireplace at the Y.M.C.A. all afternoon until 8:30 when we came home in the rain.

Wednesday April 2– Better weather today.  Stuck around all A.M. Very restless, I hate to see the 20th boys go without me. Visited the bunch this P.M. and evening.  They hardly expect to get away for a week yet.

Thursday April 3– This is a bright April day.  Best news I have had since I left Dax.  A telegram first came saying none are to be held for commissions unless they desire.  Otherwise to go home with their outfit. Didn’t take me one second to decide which I shall do.

Friday April 4 – This P.M., while over with the 20th word came that they are to embark tomorrow P.M.  Everyone happy. Spent the P.M. trying to get fixed up so that I can sure go. Kraft is going to stay.  Tonight 6 of the boys 157 inf. Received their commissions. Looks like I will miss mine about one day.

Saturday April 5 –  Waited all A.M. for orders to go back with the 20th.  Received them about 11:00 reaching the outfit about 30 minutes before leaving for Bassens.  Marched to Bassens, had a good lunch from Red Cross, boarded Roanoke  about 3 P.M. Saw Dave Robertson in the evening.

Poppa and the other soldiers of the 20th Engineers left their home camp in Dax, France on March 17th optimistic that they would soon be back in America.  Two weeks later they are still killing time in camps in the Bordeaux area of France.  To add to his misery Poppa has been told that soldiers like him who are eligible to receive an officer’s commission might be staying in France and not returning home with their units.

At the beginning of this week Poppa appears resigned to the fact that he will have to stay in France to receive his officer’s commission while the rest of his unit heads for home.  It must have been depressing for him to be in that situation.  On top of that the weather is rainy and the roof of the barracks leaks.  But his fortunes change suddenly when the army appears to change plans and suggests that those in his situation can return home with their units if they are willing to forego their commission.  Just minutes before his unit leaves camp he receives orders indicating that he can indeed sail for home with his buddies of the 20th engineers.

On Sunday April 5th, 1919 he boarded the USS Roanoke at 3:00 pm to begin the journey back to America!  But… the ship is still in port as the week ends. 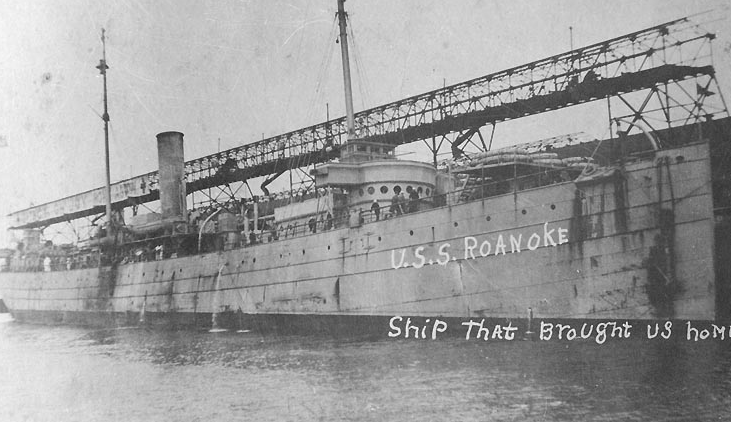 Next week:  Looks as though we are in for a long trip.