Background:  In September 1917 My grandfather, John Rodney Jamieson, who we later called ‘Poppa’, joined the United States Army.  He was assigned to the 20th Engineers whose primary purpose was to mill lumber and build the wooden structures needed by the soldiers. In November he sailed to St. Nazaire, France aboard a troop transport ship.  He is assigned to the headquarters unit of Company A and is now based at a camp set up inside a bull ring in Dax, France.

Thursday Jan 17– We are having beautiful weather.  About the same as Wisconsin May weather.  This used to be a winter resort.

Saturday Jan 19– Some of the French people are very cordial and welcome us here.  Others think we have no business here.

I appreciate everyone who reads my blog.  Writing this has been an interesting adventure for me. I learn many things every week simply by researching topics mentioned 100 years ago by my grandfather.  This week is a good example.  I never knew the role that the telephone technology played in the ‘Great War’ and I certainly had never heard of the ‘Hello Girls’.  Thanks for sticking with me!

Telephone use by the armies of the world was quite common by the start of the first world war.  Radio was not practical for military use because it still used morse code, was heavy and hard to move and could easily be intercepted by the enemy.  Telephones were relatively light, dependable and wires could be strung near battlefields relatively easily.  Although America’s civilian phone system was more advanced than some other countries the system was not yet mechanized and depended on human operators sitting at switches to route calls.  Shortly before the United States declared war in 1917 the army realized that it need telephone operators quickly.  It was especially short of operators who were bilingual.  At the time AT&T officials reported that they believed women were better suited to be operators than men because they could handle the stress better. They reported that in the time it took a man to handle one call an experienced woman operator could handle 5 calls. 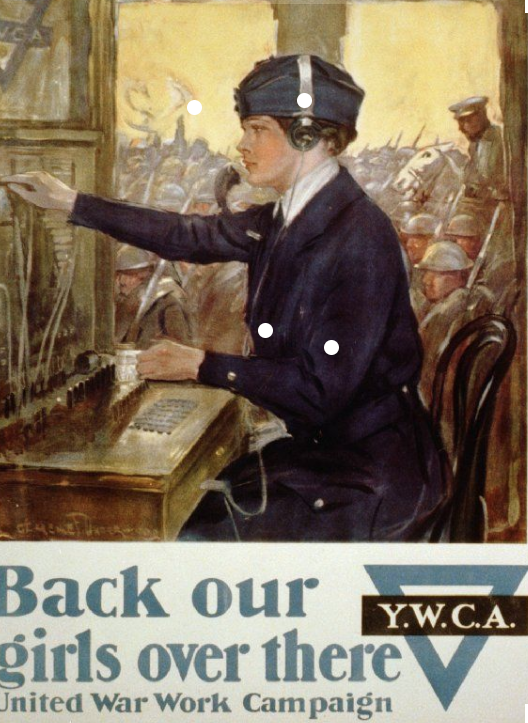 So, when General Pershing asked for help in setting up a telephone system for military use in France AT&T strongly suggested that it be run by female operators. Desperately behind in setting up communications at the front General Pershing agreed.  Once word got out thousands of American women applied for a few hundred operator jobs.  Some spoke French well but had little or no operator experience.  Others were experienced operators who may have embellished their ability to speak French.  At any rate, telephone operators were hired, assigned to the Signal Corps,  and sent to France even before a contact for their services could be devised by the military.  The army had never allowed females to enlist and had no women outside of clerical positions (Except nurses who technically weren’t in the army even though they worked within range of enemy fire). So the women operators, who were required to  military-like uniforms and worked for the U.S. army near battlefield conditions were not considered members of the army.  (They, like nurses, were paid less than men).  Officially classified as operators the women called themselves the “Hello Girls”.

According to the book “Hello Girls” by Elizabeth Cobbs (2017) during World War I the US Army sent 223 women to France to serve as telephone operators.  They were the masters of the latest technology of the times- the telephone switch board.

The U.S. ultimately ran an entirely new telephone system throughout France that would allow operators to talk with English-speaking operators. But when they first got there they were interacting with French lines and French women. These were generals and operators who had to communicate across lines with their counterpart in other cultures. An American officer might not speak French, and a French officer might not speak English, so the women also acted as simultaneous translation. They were not only constantly fielding simultaneous calls, they were translating, too. It was this extremely high-paced operation that involved a variety of tasks. They were sweeping the boards, translating, even doing things like giving the time. (Smithsonian.com)

It’s possible that the war would not have been won without the hello girls and other women who took on many of the tasks at home that men left behind when they went to war.  Their work also likely helped women earn the right to vote in 1919.

Monday January 16– Marquerite is the French name for the oxeye daisy.   By the way, the iris, or Fleur-de-lis is the national flower of France.

Saturday January 19, 1918–Some of the French people are very cordial and welcome us here.  Others think we have no business here.

We don’t know the context of that reference but I’m sure that having soldiers take up residence in your previously quiet town could upset some of the residents.  In general however, the arrival of the fresh American soldiers in 1917 had an amazing effect on French morale.  The French were very happy and hopeful when Americas finally decided to join the war on their side and send soldiers to fight along side them. After years of devastating war and it’s associated hardships the French were hopeful that the tide would change in their favor with the help of the Americans.

The men who went to France were part of the  American Expeditonary Forces (AEF) under the command of General John J. Pershing.

January 18th, 1918–  Poppa joined the US Army and the 20th Engineers in September or 1917.  Four months later the army advertised that it was still looking for men with lumber related skills.  Here is an article from the New York Lumber Trade Journal from this date.

Next Week: Working on the Roads and Missing Reveille

2 Replies to “100 Years Ago this Week: Some Think We Have No Business Here”