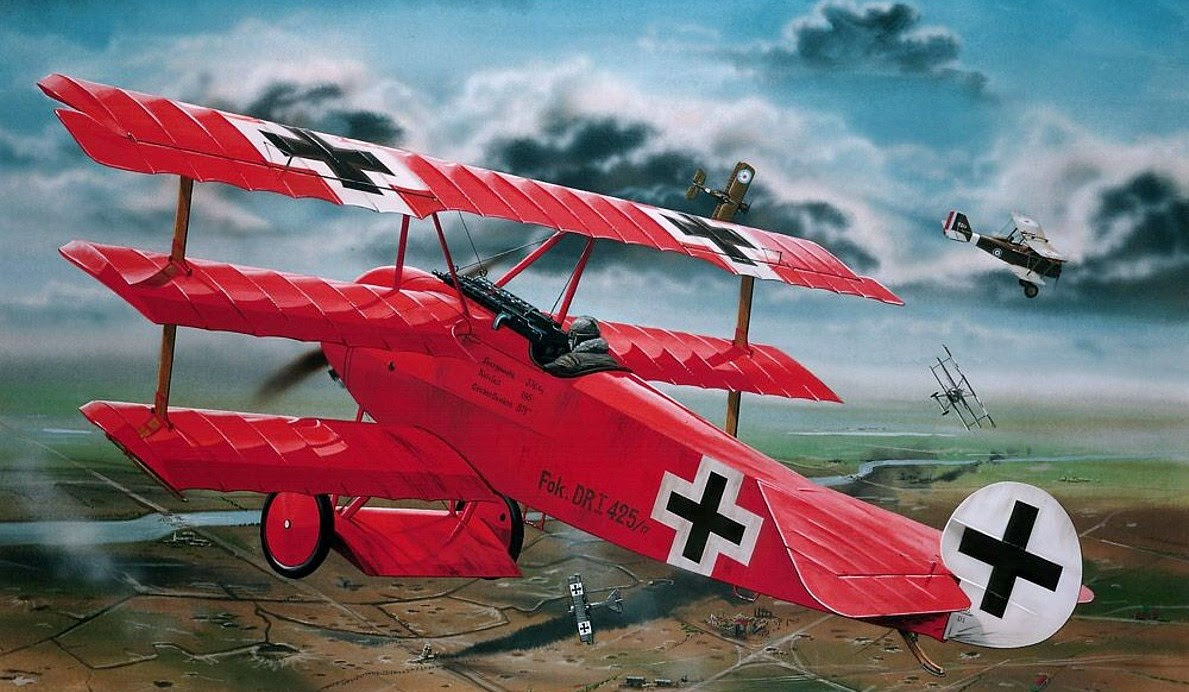 Background:  In September of 1917 My grandfather, John Rodney Jamieson, who we later called ‘Poppa’,  joined the U.S. Army.  He was assigned to the 20th Engineers whose primary purpose was to mill lumber and build the wooden structures needed by the soldiers.  In November he sailed to St. Nazaire, France aboard a troop transport ship.  He was assigned to the headquarters unit of Company A and is now based at a camp set up inside a bull ring in Dax, France.  The company has been recently struck by the sudden death of their commanding officer Major Edward E. Hartwick, of meningitis  On March 31st, 1918.

Wednesday April 24– Garage is nearing completion and my job is nearly done.

Friday April 26– Started survey for hospital site down the river around the hotel and seminary.  Many very interesting things around these places and have met several English speaking people.

Manfred von Richthofen was the the German pilot known as “The Red Baron.” On the day that Poppa was playing baseball with the other soldiers he was likely unaware that 600 miles away in the skies over France “The Red Baron,” was killed by Allied fire.  Originally in the German army, the Red Baron  switched to their air force and  in 1916  he downed 15 enemy planes.  By the time of his death he had 80 victories under his belt,  more kills that any other ace on either side in WWI.  On this last day Richthofen penetrated deep into Allied territory in pursuit of a British aircraft.   One account reported that The Red Baron was flying too near the ground when an Australian machine gunner shot him through his chest, and his plane crashed into a field alongside a road.  Another account has Captain A. Roy Brown, a Canadian pilot in the Royal Air Force, shooting him down. For the last 8 months of his life Richthofen flew a Fokker triplane, painted red.   It is this aircraft that Richthofen was most commonly associated with and it led to an English nickname for the German pilot–the Red Baron.

British troops recovered his body, and he was buried with full military honors. He was 25 years old.

On April 9th the Germany’s military initiated the Georgette Offensive when 46 divisions from the German 6th Army attacked the British 2nd Army around Ypres, Belgium.   The Germans pushed the British back three miles to the outskirts of Ypres.  However, by April 22,  when Poppa read news of the battle in the newspaper the arrival of British, French and Australian reinforcements from the south had begun to slow the German momentum and by April 29th the offensive halted.  Georgette, was only a partial success. Their goal of first separating the British and French armies and then destroying the British via Georgette is not achieved.  The Germans suffered 330,000 casualties and as a result  lacked sufficient reserve troops.  Ypres is about 620 Miles from Dax.

Monday, Sept. 24th, 1917 –Enlisted at Milwaukee in the 20th Engineers. Rode all night in car of rough necks to St. Louis.

Friday April 26, 1918– Started survey for hospital site down the river around the hotel and seminary.  Many very interesting things around these places and have met several English speaking people.

Poppa apparently is part of an effort to build a military hospital “…down the river around the hotel and seminary”.  A search of the internet for Dax, seminary resulted in this image labelled “N. D. du Pouy la maison vue du Nord Quest”.  There is also a reference to the fact that St. Vincent de Paul was born in Dax.