Background:  It is November of 1918 and one week after the end of WWI.   It has been more than one year since my grandfather, John Rodney Jamieson, who we later called ‘Poppa’, enlisted  in the United States Army’s 20th Engineers.  In November, 1917 he sailed to France aboard a troop transport ship.  He was assigned to the headquarters unit of Company A based at a camp set up inside a bull ring in Dax, France.  However,  on November 7, 1918 he travelled to Langres France and enrolled in Army Candidate School (A.C.S.).   Here are the journal entries he wrote one hundred years ago this week.

Sunday November 17, 1918– Spent forenoon taking bath and writing letters.  In afternoon went to Langres to infantry school trying to locate (?).  Was unable to find mine but enjoyed the day anyway.

Monday November 18– Much work but it is interesting but very hard.   Have to be on the job every minute.

Tuesday November 19– Many rumors about this school closing and everyone anxious to see it close.  The work goes on just the same all day.

Wednesday November 20– Our instructor taken sick so today we have been having different ones.  Several fellows sick with bad colds. Some just sick of this place.

Thursday November 21– Good morning M. Candidate with your chances just as slim as mine —etc.  Very appropriate song and expresses the thoughts of everyone.

Friday November 22– Had live grenade practice today .  One poor fellow had misfortune to pick a defective one which went off in his hands.  Blew off both hands and injured him otherwise. (?) …very, very good.

Poppa spent nearly a year with the 20th Engineers in Dax France.  His work there involved drawing blue prints and planning wood structures needed by the soldiers.  He complained several times in his journal that he was tired of that type of work and applied to go to A.C.S.  Apparently, this is ‘Army Candidate School’ where he could earn an officer’s commission upon completing some classes such as   bridging, camouflage, flash and sound ranging, mining, pioneering, topography and searchlight.

However, he has been at the school in Langres, France only 10 days and already appears to be regretting his decision to enroll.  In his journal he complains about the lack of food and the living conditions which are worse than what he experienced in Dax.  The war has been over for a week, and there are rumors that some soliders are returning home.   Wet weather and the loss of his luggage on the way to camp has added to his misery.

On November 21st Poppa writes “Good morning Mr. Candidate with you chances just as slim as mine… etc” .  He implies that this is a  song lyric. 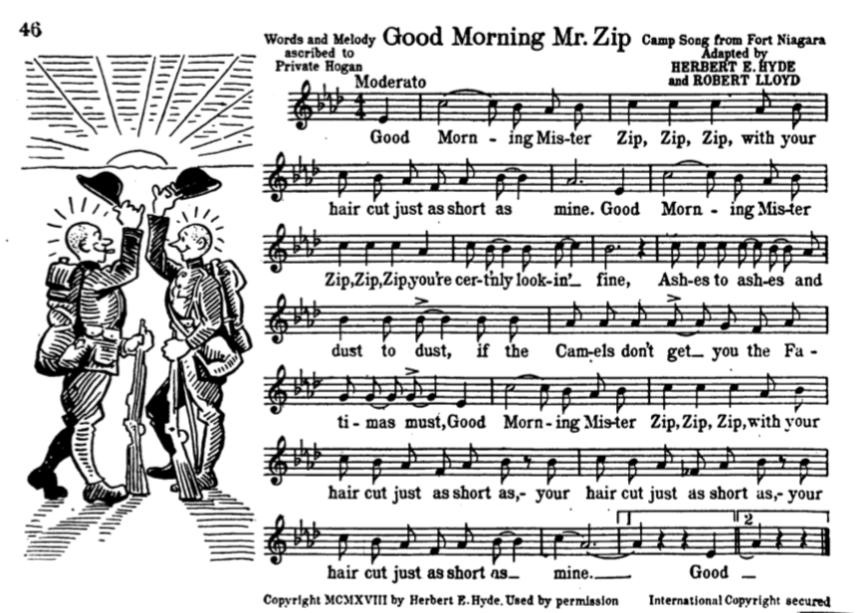 One popular song in 1918 was Mr Zip Zip Zip which included the lyrics:

Good morning, Mister Zip-Zip-Zip,
With your hair cut just as short as mine,

It appears that Poppa adapted the lyrics from this popular song of the time to apply to his own situation when he wrote:

with you chances just as slim as mine…

On November 22nd Poppa wrote that he had live grenade practice and told about a poor fellow who had a defective grenade go off in his hands and was seriously injured.  Poppa does not write that he experienced this incident or if it happened previously.

In another soldier’s journal Phillip H. English wrote of a grenade training accident that happened at Langres in January of 1918, prior to Poppa’s arrival.  It’s possible that Poppa is referring to this prior accident in his own journal.

Here is a Youtube video about the types of hand grenades used in WWI:

Next Week:  Thanksgiving dinner in Rolampont.