Sunday Mar 31, 1918– Not a very pleasant Easter as today at 3:25 Pm Major Hartwick died.  There will never be another major after service under this man. Body shipped to Bordeaux tonight. Hq Dept. bought nice wreath of flowers.

Monday April 1– Funeral at  B ———- today.  Several of the boys were allowed to go, I could not go.  Rained nearly all day here.

Tuesday April 2– Major Weisel has taken over command of our battalion.  Rec’d notice to go to B— tomorrow for examination for Corps of Engineers U.S. Army.

Wednesday April 3– Did not go to B—— for exam, postponed.  Some real nice mail today.

Thursday April 4 –Working each day at building garage and machine shop.  Building in all 36×60. Have had 8 men each day on the job.

Friday April 5– Took exam for Corp of Engineers today.  Two Colonels gave it. Not very much encouraged over outcome.  Going to B—- this PM for physical examination.

Saturday April 6– Spent day at B——. Took physical exam at base hospital (?) 6 , saw many interesting things.  “Skin clear except for recent ? Bites. 3 of us took exam. Brundage an (?) Johnson were the others.

Death of a Commanding Officer

Sunday Mar 31– “Not a very pleasant Easter as today at 3:25 Pm Major Hartwick died.  There will never be another major after service under this man. Body shipped to Bordeaux tonight. Hq Dept. bought nice wreath of flowers.”

Edward E. Hartwick had graduated from West Point and served in the Spanish American war.  He retired from the army and went into the lumber business in Grayling and Detroit Michigan until he rejoined the army in 1917 to work as an officer in the 20th Engineers.  It appears that Poppa worked closely with him and for a time was his orderly.

According to the book ” A Biographical Study of Major Edward E Hartwick” by Gordon K.Miller the Major died of meningitis Sunday March 31,  1918 at 3:25 Pm French time and he was buried at 3 PM Monday in Bordeaux, France.

It appears that Poppa and his mates had great respect for the Major.  One of his soldier friends that Poppa mentions frequently in his journal is M.Malone who wrote this letter to the Major’s widow: 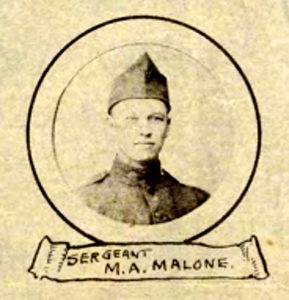 associated with and commanded by a man of his character and ability.  He was never tiring in his labors never weakening in his undertakings, and always looking out for the comfort and welfare of his men.  He was faithful to his country, he was faithful to his family, and thus he came to the end of a perfect day on this earth And now I would write across his records here was a MAN and a SOLDIER to the end.”

Two years after Hartwick’s death his body was removed and buried in Detroit Michigan.   In 1927, his widow purchased more than 8,000 acres  of land in  Michigan’s Lower Peninsula and donated the parcel to the state of Michigan in her husband’s name. This became the  Hartwick Pines State Park, the largest state park in the lower Peninsula.

Was Poppa disappointed that he was not allowed to attend the Major’s funeral?   Bordeaux is about 90 miles from Dax.

Tuesday April 2– “Major Weisel has taken over command of our battalion.”

The only other reference I could find to Major Weisel was in this article from the 1918 edition of the American Lumberman.

In his journal entries this week Poppa referred to Bordeaux or B—- almost every day.  He reported that Major Hartwick was buried there and later in the week Poppa received his physical exam there at Base Hospital 6.

Bordeaux , a French city about 90 miles from Dax, where Poppa was stationed is the world’s major wine industry capital and in 1918 had a population of over 250,000 people.

Base hospital 6 was located near Bordeaux.  It was organized at the Massachusetts General Hospital in Boston and traveled to France a a unit.  They left New York on July 9, 1917 and were treating patients in Bordeaux by August 21st.

According to Michel Boquet:  “Foreign soldiers who died there were buried at the Talence Communal Cemetery extension. The Americans were later exhumed and buried or in their country or at the Suresnes American Cemetery. Mainly, the Canadians stayed there.”

I wonder how long it took to travel from Dax to Bordeaux in 1918?  Did they drive a military vehicle or did they take a train?

Next Week:  We all Hope That the French and English Will Hold Them