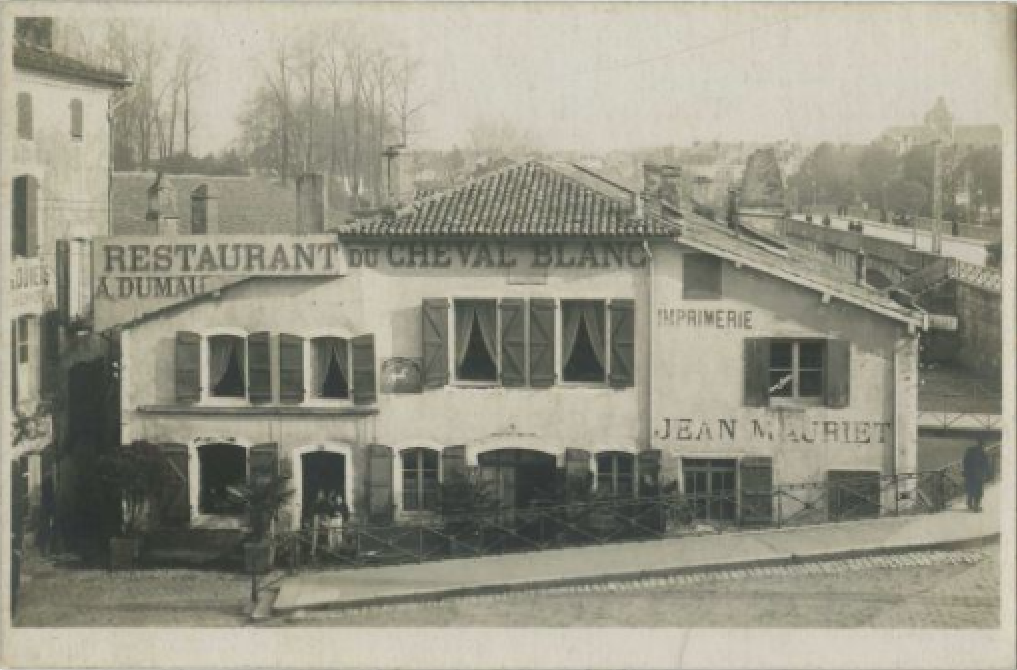 Background:  In September of 1917 My grandfather, John Rodney Jamieson, who we later called ‘Poppa’, enlisted in the United States Army’s  20th Engineers whose primary purpose was to mill lumber and build the wooden structures needed by the soldiers.  In November he sailed to France aboard a troop transport ship.  He is assigned to the headquarters unit of Company A and is based at a camp set up inside a bull ring in Dax, France.

Sunday June 23, 1918– Rather quiet day. The past two weeks have been wet and rather cool.  Today is again warmer.

Tuesday June 25– The newspapers are very encouraging.  Austrias failure of her offensive timed to Italy’s victory.

Friday June 28– All quiet on the Dax sector today.

What was it about his latest letters from Marion Clarkson Brown that made him “very happy today and henceforth”?  Have they some how taken their relationship to a new level through the mail?

Tuesday June 25– The newspapers are very encouraging.  Austria’s failure of her offensive timed to Italy’s victory.

In 1915 Italy joined Britain as one of the Allied Powers.  Austria was on the German side.  On June 15th, 1918 Austrian troops began an offensive along the Piave River in Italy, at the urging of the Germans. Although suffering from a lack of food, horses and supplies, they crossed the river and established a 12-mile front, but then realize they can not hold it against the Italian Army and withdraw after suffering 150,000 casualties. Following this, Austrian soldiers in Italy begin deserting. This  Second Battle of the Piave River,  which ended on June 23rd, was a decisive victory for the Italian Army.   It would later become clear that the battle was in fact the beginning of the end of the Austro-Hungarian Empire.

In a previous entry (Friday April 26, 1918) Poppa wrote– “Started survey for hospital site down the river around the hotel and seminary.  Many very interesting things around these places and have met several English speaking people.”  And, on Wednesday June 5, “Grading and setting sills for regimental hospital which will be located here.  Consisting of 5 large tents, five small and two buildings.”

Poppa refers to the ‘seminary’ in Dax, France.  The seminary was named for St. Vincent de Paul who was born in Pouy, near Dax, France  in 1581.  In the later half of the 19th century his followers built the seminary near the birthplace of Vincent.   The bull ring where Poppa served as part of Company A of the 20th Engineers is nearby.  During the WWI, the Great Seminary of Pouy was used as a civilian Hospital from September, 1st 1914 to January 27, 1919.
Apparently Poppa and the other engineers were engaged in building an American Army hospital near the existing civilian hospital which was housed in the seminary built to honor St. Vincent de Paul.  This hospital had been authorized by Poppa’s commanding officer Major Edward E. Hartwick prior to his death on March 31, 1918.  (Thank you to Michel Boquet for providing information about the seminary and hospital).
Next Week: Dominion Day and A July Fourth Fire
Sources:
“Second Battle of the Piave River.” Wikipedia, Wikimedia Foundation, 15 June 2018, en.wikipedia.org/wiki/Second_Battle_of_the_Piave_River. Accessed 19 June 2018.