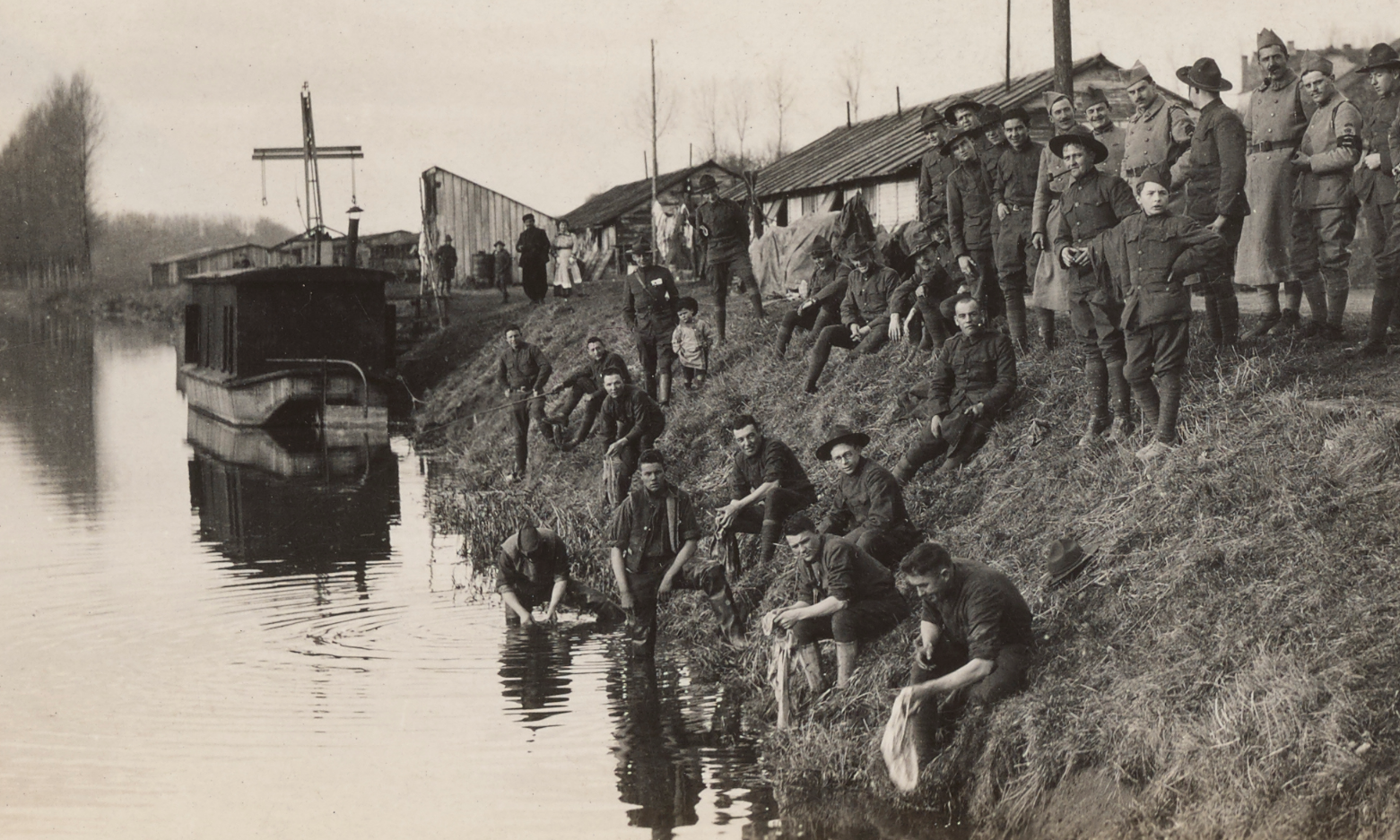 Background:  It is December of 1918, three weeks after the end of WWI.   It has been more than one year since my grandfather, John Rodney Jamieson, who we later called ‘Poppa’, enlisted  in the United States Army’s 20th Engineers.  In November, 1917 he sailed to France aboard a troop transport ship.  He was assigned to the headquarters unit of Company A based at a camp set up inside a bull ring in Dax, France.  However on November 7, 1918 he travelled to Langres France and enrolled in Army Candidate School (A.C.S.).   Here are the journal entries he wrote one hundred years ago this week.

Monday December 2– At last some mail came today.  Six letters in all which I was mighty glad to get.  Started mining course today.

Tuesday December 3– Still walking in mud, most of the time with wet feet.  Major Moses gave us a talk yesterday  telling us we are S.O.L. for commission but school must go on.

Wednesday December 4– Rumors,-rumors and rumors, everyone makes a rumor to suit his own feelings.

Thursday December 5– Mining class is quite interesting.  Much better than doughboy drill entire day.  go to the  fort (?) and work on note book about every night.

Saturday December 7– More mail again today.  Guess they have found me at last.

In the 21st century we think of the United States military as strong and nimble, able to deploy to any part of the world at a moment’s notice.  However, at the beginning of the last century things were different.   Our military was seen as primarily defensive,  intended to defend America from invaders.   Therefore, when President Wilson reluctantly entering the U.S. in WWI the military had little experience on foreign shores.  The military had to quickly learn to deal with issues such as transporting a large army to Europe, developing lines of communication and simply feeding and clothing the soldiers.
The military thought it was important to have training schools in France and worked throughout 1917 to set them up.  Shortly after the Engineer Training School began educating soldiers in areas such as mining, bridging and grenade throwing  the war ended and the armistice was signed.
Poppa was caught in the transition.  He arrived at the school on November 7th, just 4 days before the war ended.  Almost as soon as his class began he heard rumors that the school would be closing.
Poppa never wrote what the goal of the training was but presumably he expected to receive a commission as an officer when he graduated,  But, by December 3rd things apparently had changed because  “Major Moses gave us a talk yesterday telling us we are S.O.L. for commission but school must go on.”
Up to this point Poppa’s generally used polite language when in his journal.  By writing “S.O.L.” he may have been venting some frustration.  By the way,  the Etymology Dictionary claims the slang term referenced by S.O.L. can be traced back to WWI soldiers in 1917.  So when Poppa wrote it in his journal a year later it was apparently of fairly recent origin.
Meanwhile, back in America
On, December 4th, 1918 while Poppa was in training near Langres France President Woodrow Wilson was boarding the S.S. George Washington to sail to France, and then travel over land to Versailles in order to participate in the peace conference.  Apparently Wilson was the first U.S. president to travel to Europe while in office.
Next Week:  If one can live through this school they can live through anything.
Sources:
“S.O.L.” Index, www.etymonline.com/word/s.o.l. Accessed 30 Nov. 2018.
“SS George Washington.” Wikipedia, Wikimedia Foundation, 29 Oct. 2018, en.wikipedia.org/wiki/SS_George_Washington. Accessed 30 Nov. 2018.
Boquet, Michel.  Thanks for information about and picture of Rolampont canal