Background:  In September 1917 My grandfather, John Rodney Jamieson, who we later called ‘Poppa’, joined the 20th Engineers regiment of the United States Army.  After training at Jefferson Barracks in Missouri and on the grounds of the American University in Washington, D.C. he sailed to St. Nazaire, France aboard a troop transport ship.  Some soldiers have recently been sent to northeastern France near the front line.  However, Poppa and other soldiers of the first battalion of the 20th Engineers remain at the American camp 2 miles outside of St. Nazaire.

Monday Dec 17– Nearly every day the band of the 116th Engineers at neighboring  camp plays “On Wisconsin”.

Tuesday Dec 18– Through Hourgines (?) good work I succeeded in Getting a pass up town and “took in” St. Nazaire. Sent souvenirs to family.

Wednesday Dec 19- Very quiet day but mighty noisy night.   Hill and Lloyd have much wedding and raise h-l till Midnight.  (?)

Friday Dec 21– Rode South all day in boxcar.  Arrived at 4:00 PM Dax all marched out but slept in car.

Saturday Dec 22– We are assigned quarters in an arena previously used for bull fighting.  Spent night under grandstand.

Dax France –  At the start of the week Poppa and the rest of the first battalion of the 20th engineers were living and working  in the US Army camp outside of St. Nazaire, France.  By the end of the week they had travelled about 350 miles south by train to Dax.  They must have been surprised to find that their new living quarters were inside a bull ring.

According to the internet bull fighting is not a common activity in France.  However,  Dax, France is only about 50 miles from the border with Spain so it appears that the bullfighting tradition spills over the Spanish border.

Major Edward E. Hartwick was Poppa’s commanding officer.  According to Gordon K. Miller, author of a biography of Hartwick here is what Hartwick wrote to his family regarding their new camp:

I have my headquarters in the town and one company on one side about four miles away and the other on another side about five miles distant The headquarters detachment about forty men are encamped- where do you think- well I got permission to pitch our tents in the “Arena”- a Spanish bull ring surrounded with raised seats all constructed of concrete similar to our ball park except the diameter of the ring is only about 150 feet but is the best camping place we will ever get.  Under the concrete raised benches are rooms where we store our baggage, also toilet rooms; and where they kept the bulls and horses we are going to keep our horses, pigs, auto, trucks automobile and the best of all- one of the hot springs is but a few feet from the entrance. A circular concrete wall with only two entrances encloses the place – a most admirable place for a little camp. When we shut the big door we are hidden from the curious, though friendly, public which has been flocking to look at us so much that I had the mayor put up a notice that it was forbidden to enter the arena without permission from him. Soon we shall have the arena connected with electric light and our own telephone to the two camps and then we will be settled.

December 17th, 1917  – “On Wisconsin” was written in 1909 and is both the state song of Wisconsin and the fight song for the University of Wisconsin.  For a young American man stationed in a country at war hearing the song of his alma mater must have provided some comfort.

Meanwhile, back in America–  On December 18, 1917 The United States congress passed the ‘Prohibition amendment’ It was then sent to the states for ratification.  In a previous episode of this blog Poppa reported that he had experienced the beginning of prohibition in Washington, D.C.  Prohibition was implemented as a result of the 18th amendment which didn’t pass until 1919.  However, state governments were encouraged to implement their own laws outlawing alcohol prior to the amendment passing.  Washington, D.C, was not a state and was governed by Congress.  So Congress decided that the city would be dry choosing November, 1st 1917 as the day that alcohol became illegal.

December 19th- Sometimes I have trouble reading Poppa’s handwritten journal.  I don’t understand what he meant by Hill and Lloyd have much wedding and raise h-l till Midnight.  What do you think he actually wrote for December 19th, 1917? 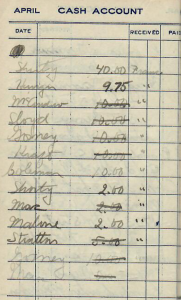 after them.  One entry said Lloyd $10.00.  Poppa’s father and grandfather were bankers.  Do you think this is how Poppa kept track of who he lent money to?  Or maybe who he borrowed money from?  Is the Lloyd listed here the same one who, along with Hill “raised h–l all night”?

Next Week: Christmas in the Bull Pen!

One Reply to “100 Years ago this Week: Moving to a New Camp”