Background: In September of 1917 My grandfather, John Rodney Jamieson, who we later called ‘Poppa’, joined the United States Army.  He was assigned to the 20th Engineers whose primary purpose was to mill lumber and build the wooden structures needed by the soldiers.  In November he sailed to St. Nazaire, France aboard a troop transport ship.  He is now assigned to the headquarters unit of Company A and is based at a camp set up inside a bull ring in Dax, France.

Tuesday Feb 5 – Rest today- Some mail including papers from home and a few letters from same place.  Package from george and Ollie Scott (?).

Wednesday Feb 6 – Took cross sections at Mees siding today.  Weather continues warm, similar to weather I am used to having in June.

Thursday Feb 7 – A day of mail – fourteen letters from U.S.A.  Most of them rather old dating as far back as Dec. 10.  One from Marion dated Jan 9th was the latest.

Friday Feb 8 –The U.S. transport Tuscania was sunk Feb 5.  First news to reach us today.  We will get them later.  Drawing maps and making blue prints today.

Saturday Feb 9 – Staking out telephone line.  Papers from Marion, two packages from home and one from Ora today.  Payday every 1 has been busted for some time.

Sunday February 3, 1918– “Wild Ladies of Paris tonight”.  Author’s note:  Sometimes it is difficult to decipher Poppa’s writing so this entry is subject to interpretation.  If you want to form your own opinion check out a copy of the entry on this page.  Vaudeville shows were popular in the early 20th century so I think that is what he is referring to.  Especially since the next day he wrote  “John and Tom both sick today.  Oh Remorse.”  By “sick” did he mean hungover?

Also on February 3rd Poppa wrote:  “Neiswanger returns from 2 weeks trip after trucks”.  In the address section of his 1918 journal Poppa has this entry: Joe Neiswanger, Brookville PA.  The April 5th, 1950 edition of the Tyrone (PA) Daily Herald newspaper states that Joseph Neiswanger, of Brookville, was a ‘veteran leader’ and past commander of the American Legion post.  Here is a picture of a grave marker for a Joseph Neiswanger who died in Brookville, PA in 1962.  He was born the same year as Poppa.  Do you think it is the same person? 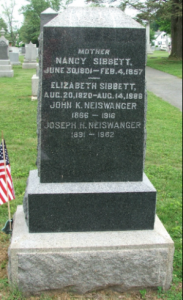 Wednesday February 6– “Took cross sections at Mees siding today.”  Mees is the location of one of the lumber mills operated by the 20th engineers.  Mees is about 4 miles from the headquarters in Dax where Poppa was serving. 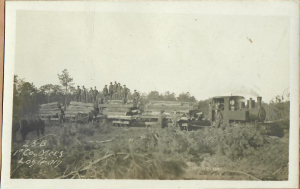 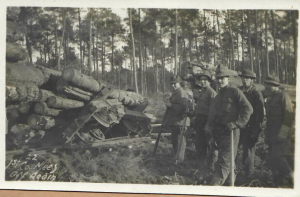 Pictures from the Mees Mill

The SS Tuscania was built in 1914 as a luxury liner for the Cunard Line.  It was named for the city of Tuscania, Italy.  In 1916 she was refitted and to serve as a troop transport.

On February 5, 1918, the Tuscania, traveling as part of a British convoy and transporting over 2,000 American soldiers bound for Europe, was torpedoed and sinks off the coast of Ireland by the German submarine U-77. 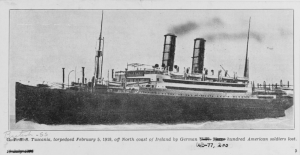 The German submarine U-77, with its crew of 34 men under the command of Captian Wilhelm Meyer, spotted the Tuscania and its convoy on the evening of February 5, just eight miles off the Irish coast. After moving into position, Meyer fired two torpedoes at the Tuscania. The first torpedo missed, but the second torpedo scored a direct hit on the starboard side.

Of the 2,397 American servicemen on the Tuscania, the convoy was able to rescue 2,187, along with the majority of the ship’s British crew.  About 200 men died.