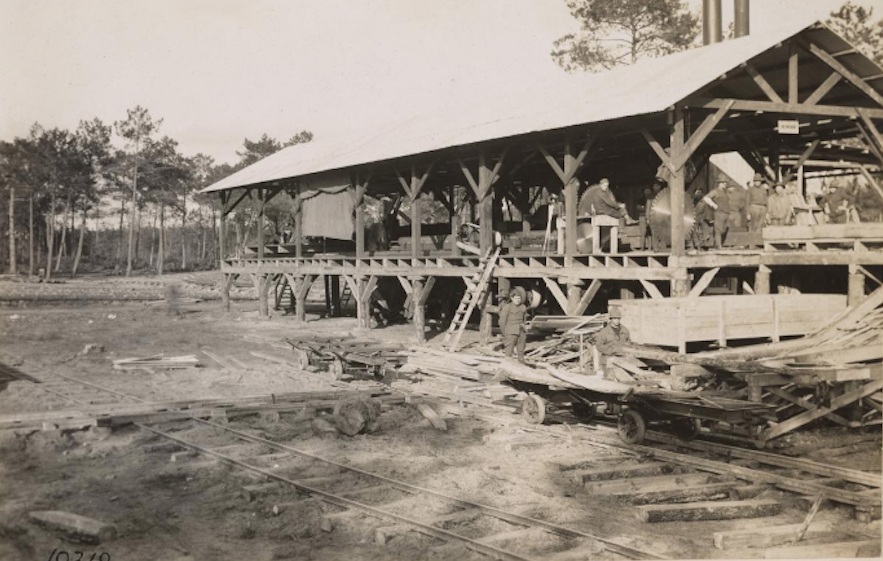 Background:   WWI has been over for more than 2 months.   It has been more than one year since my grandfather, John Rodney Jamieson, who we later called ‘Poppa’, enlisted in the United States Army’s 20th Engineers. He has been in France since September of 1917.  He was assigned to the headquarters unit of Company A based at a camp set up inside a bull ring in Dax, France.    Here are the journal entries he wrote one hundred years ago this week.

Monday January 20– Started work today, making table survey of present narrow gauge track in place at abandoned 1st. Co. operation.  2nd Co. (Det) ? is now at this camp while 1st Co is at Pontex helping to get out the burned timber there that the U.S. has on its hands.

Tuesday January 21– Finished up the outside work this A.M. Started the map this P.M.  Am to go back to my old job, relieving the fellow now at it. Not much to do it appears but I would much prefer more work on an outside job.

Wednesday January 22– The river is again very high, not as high as last spring but it may reach that point soon.  Gave us shorter hours today – eight hours is now the official times of labor.

Thursday January 23– About 40 M.P.s are now located here.  They are to be stationed here permanently, at present eat with us but will later have their own mess.  Y.M.C.A. concert tonight at Y.  Two girls with Red who has been here several times before. One girl sings very well, The other a dancer who makes one think himself at a cabaret show somewhere. Had a little dance afterwards.

Friday January 24– More mail today.  Did not expect any so soon so this was a pleasant surprise.

Saturday January 25– Not a thing to do all day.  Spent all my time in office writing letters, reading, etc.  Will probably have several of these kind of day.

On January 20, 1919 Poppa started writing in a new pocket diary.  The title on the front is “Agenda” and it is printed in French, suggesting that, unlike the journals he used for 1917 and 1918,  he acquired this journal in France.

The Paris Peace Conference started on January 18, 1919 in Versaille, France.  It was held to negotiate peace treaties which ended WWI.

After leaving Engineers Training School Poppa has re-joined his unit in Dax, France.  Throughout France the American Expeditionary Force (A.E.F.) was beginning the massive logistical effort of returning its soldiers to America.  Camps were closed or consolidated and soldiers moved to new temporary locations until they could be sent home.   As a result Poppa’s camp in Dax is now home to the M.P.s (military police ?) and the 2nd Company.  Poppa wrote that the 1st Co, which was the original unit in this camp, has been sent to the ‘burned area’ in Pontenx (often misspelled Pontex) to help with clean up.

The burned area refers to  the remains of a forest fire that occurred in early September, 1918. The fire was intentionally started  by local residents who were unhappy with the sale of the forest to the Canadian and U.S. militaries.    The fires they started would eventually burn 30,000 acres and 180,000 trees as well as three camps set up by the Canadian armed forces and some small French villages.  Local residents, Canadian soldiers and American military personnel worked to extinguish the fire.  Despite their best efforts the fire continued until it reached the shore of Gastes-Parentis Lake were it burned itself out.  (per Michel Boquet)

Some of the burned timber could still be salvaged and used if milled soon.  However,  if left untouched, by the spring it would no longer have value.  So the French Government asked for the American and Canadian forces to help clean the burn area before they returned to North America.

New railroad tracks were run to the burned area, new barracks, headquarters and ‘Y’ huts were built.  Several of the lumber mills that had been set up around France were moved to the burned area and used in the salvage operation which continued through the winter of 1918-19.  At one point it became the largest lumber mill in Europe and produced more than half a million board feet of lumber per day.

Therefore, with their services no longer needed for the war effort,  the soldiers of Poppa’s unit were sent to the burn area.  Poppa, as part of the Company A headquarters staff remained in Dax, for the time being.

On January 23rd Poppa attended a concert at the YMCA.  “Two Girls with Red” performed.

When the U.S. declared war in 1917 the military was inexperienced with meeting the needs of a large army.  The Red Cross provided nurses and ambulances and the YMCA stepped in to meet the social and emotional needs.  YMCA huts manned by volunteers were put up all over France.

Next Week: We Expect to Give Another Show