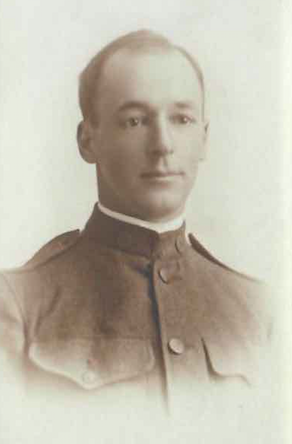 Background:  WWI  has been over for over 4 months and the soldiers of the American Expeditionary Force are being sent home from France.   My grandfather, John Rodney Jamieson, who we later called ‘Poppa’, has moved with his buddies to a camp in Bordeaux.  He is anxiously awaiting his orders to head home.   Here are the journal entries he wrote one hundred years ago this week.

Sunday March 23, 1919 –  The most disappointed fellow in the A.E.F. today.  Have not been able to get more information yet. Do not want commission or to stay over here.  Have hopes that it can be fixed up some way so that I may yet go back with the boys. Arm very sore from shot.  Nearly sick. Saw “Let’s Go” tonight.

Monday March 24 – Still hoping that something can be arranged so that I can go home with the bunch.  Not much to eat in this camp and we are quartered in different barracks all over camp. Gilcrest, who was left behind in the hospital with the flu caught up to us today.

Tuesday March 25– Nothing definite today, looks very doubtful that I can go with the 20th.  Rec’d a note from D.J. Robertson at Bassens with Q.M.C. Hope to see him tomorrow.

Wednesday March 26– Went to Bassens today for some canteen supplies and called on Dave Roberson.  When I returned found that I was detached from 20th and attached to Hdq of embarkation camp. Moved to other camp.  Found 70 others in the same fix that I am in. Good quarters here however. Hope the commission will come soon.

Thursday March 27– We are quarantined in a good barracks with floor here.  Have a good place to eat with nothing to do but wait. Went to other camp this P.M. Visited with the old bunch all afternoon and evening.

Friday March 28 – Doing nothing- It’s very tiresome- wrote a few letters this A.M.  Spent P.M. in Bordeaux. Good supper at Y with real ice cream. We are allowed passes everyday when not on duty from 2 to 9 P.M.

Saturday March 29 – Moved this A.M. to a dirty, old, casual barracks.  Hope to move again soon as every other one is better than this place. Visited the old gang at other camp this P.M.  Stayed there for supper and until 8 P.M.

For the first leg of their trip home Company A of the 20th engineers have left their camp of over a year and traveled by train to Bordeaux.  They have been there over a week awaiting orders to go home.  But there is a complication.  Because he is a candidate for an officers commission Poppa had recently been told that he would have to remain in France.  Given the choice, he would gladly forget the commission and head for home.  But it’s not up to him.   On March 26th Poppa was detached from his unit and assigned to the headquarters unit of his new camp.  With little work to be done he spends his days with his old unit but sleeps in his new camp with “70 others in the same fix that I am in”.  It appears now that his buddies will soon be returning to America without him.

On March 23rd Poppa saw “Let’s Go” which was a short film from 1918 starring Harold Lloyd.

On March 26th Poppa drove to Bassens, which is less than 10 miles north of Bordeaux, for supplies.  Like Bordeaux, Bassens is a port community.  While there he visited with Dave Robertson who I believe is a relative.  Poppa had an aunt whose family name was Robertson.

Two weeks after leaving their home camp in Dax Poppa and his unit are only 90 miles closer to home.

Next week: I hate to see the 20th boys go without me