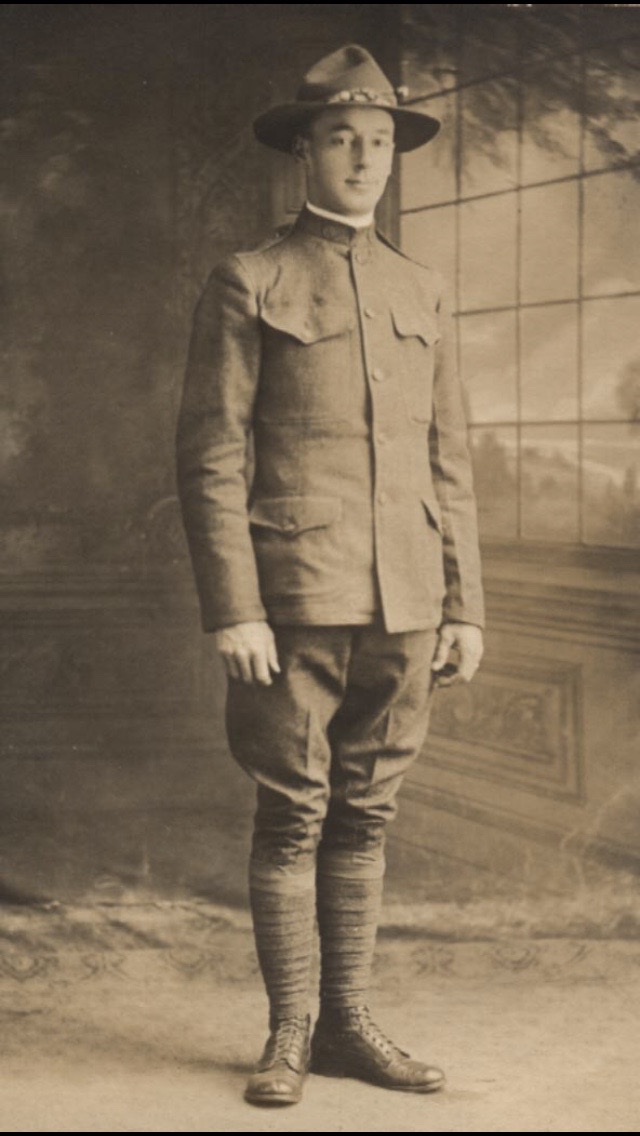 Background:  In September of 1917 My grandfather, John Rodney Jamieson, who we later called ‘Poppa’, enlisted in the United States Army’s 20th Engineers whose primary purpose was to mill lumber and build the wooden structures needed by the soldiers. In November he sailed to France aboard a troop transport ship.  He is assigned to the headquarters unit of Company A which is based  inside a bull ring in Dax, France.  Many of the soldiers around him have come down with the Spanish flu.  Here are the journal entries he wrote one hundred years ago this week.

Sunday August 25, 1918– Had talk with Chaplin this morning.  Baseball game in the afternoon. Game of tennis this evening.  Has been a very good day.

Monday August 26– “Blue Monday”.  A dark rainy day.  Everyone’s spirits about as bright as the day is.

Tuesday August 27– Joe is taken to the hospital today for two days treatment.

Wednesday August 28– Today while lying in bed in hospital Joe sees  a kid drowning in river.  He jumped through side of tent over to and into the river saving the kid from drowning.  We made a “ Croix de guerre” out of piece of old copper and presented it to him in a “mock” formation. At 9:00 P.M.

Friday August 30– Canadians have invited us to a picture show at their camp tonight to see some American pictures.

Saturday August 31–The allied armies are racing for the Rhine Each one driving at germans ahead of it.

A Child is saved from drowning

On Tuesday August 27th Poppa noted that a soldier friend named Joe was taken to the hospital for two days of treatment.  He doesn’t say what he is bring treated for but many soldiers on both sides of the conflict have been sickened by the Spanish flu.  Possibly that is Joe’s situation.

The next day Poppa wrote in his journal that Joe saved a child from drowning in the river. “ He jumped through side of tent over to and into the river saving the kid from drowning.”

A  “Croix de guerre” is a French medal of honor presented to soldiers who distinguish themselves in battle.

Here is an article about the event from the battalion newspaper.

This article mentions that Joe was presented with the D.S.O.  The only military abbreviation  I could find for DSO is  “Distinguished  Service Order”  However, this is a British military honor awarded to British soldiers who distinguish themselves in battle so it may not be what is referred to in the article.

The article quotes ‘Messergent Bandage‘.  I believe they might be referring to another of Poppa’s soldier colleagues M.R. Brundage .

I don’t have a picture of Joe Neiswanger.  However, In the address section of his 1918 journal Poppa has this entry: Joe Neiswanger, Brookville PA.  The April 5th, 1950 edition of the Tyrone (PA) Daily Herald newspaper states that Joseph Neiswanger, of Brookville, was a ‘veteran leader’ and past commander of the American Legion post.

Here is a picture of a grave marker for a Joseph Neiswanger who died in Brookville, PA in 1962.  He was born the same year as Poppa.  Do you think it is the same person?

Next Week:  We should have much better eats now!