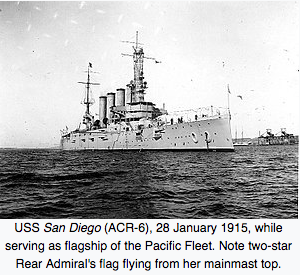 Background:  More than one month after arriving at the American University in Washington, D.C. My grandfather and other soldiers of the 20th Engineers are packed up and ready to move.

Wednesday Nov. 14–We are escorted by one Battle cruiser and two torpedo Boat destroyers.  One other transport.  Weather fine.

Thursday Nov. 15– Acting as orderly for Maj. Hartwick  I am getting very well acquainted with the boat (?) weather still fine.

Saturday Nov. 17–Several still seasick.  My appetite has been lost altogether.  I certainly will be glad to get to land.

On Sunday, November 11th, 1917  my grandfather, along with the other soldiers of the First and Second Battalions of the 20th engineers, left Camp American University where he had been since since October 4th.  Imagine what the soldiers must have been feeling as they left camp “on the Q.T.” .  They did not know where they were going but they must have suspected that they were about to join the war in Europe.

Sometimes it is difficult to read his handwriting in his journal.  It appears that he writes they marched to “Rotin” yard.  Here is a copy of that entry.

Since they “Rode all Night” I assume they were on a train. But what is the “Rotin yard”?.  Do you have a better reading of the phrase?

Update:  Mystery solved!  Thank you to Michel Boquet for pointing out that in the book Twentieth Engineers, France 1917-1919 it was reported  that other units which trained at American University left from Roslyn (not Rotin).

Rosslyn Virginia is about 3.5 miles from the camp at American University and just across the Potomac River.  It seems reasonable that the soldiers might march that distance to board a train for Jersey City.  Although it doesn’t look like Poppa was trying to write Rosslyn it is likely that was their departure point.   Possibly he did not know the name of the place, or had not heard it correctly.

Monday November 12, 1917– Jersey City, New Jersey is 222 miles from Washington, D.C. and across the Hudson from New York City.  In nearby Hoboken there is a memorial ‘boulder’ commemorating the city’s role as an embarkation point for WWI service men and the three million troops passed through the port.

The Madawaska had previously been the German liner “Konig Wilhelm II.”  According to Wikipedia she was a steel-hulled screw steamer launched on 20 July 1907 at Stettin, Germany.   It was built by Germany for the transatlantic passenger trade, and travelled  between Germany, and Buenos Aires, Argentina, until the outset of World War I in 1914. Voluntarily interned at Hoboken, New Jersey, to avoid being captured by the Royal Navy, the passenger liner was seized after the United States entered the war on 6 April 1917, as were all other German vessels in American ports.

Before agents of the U.S. federal government took possession of the ship, her German crew attempted to render her unusable by cracking her main steam cylinders with hydraulic jacks. Following repairs to the damaged machinery, Konig Wilhelm II was commissioned on 27 August 1917.

She was renamed Madawaska on 1 September, 1917.   During World War I, she conducted 10 transatlantic voyages in which she carried nearly 12,000 men to Europe. After the armistice of 11 November 1918, Madawaska made seven more voyages, bringing 17,000 men home from the European theater.

It appears that Poppa travelled across the Atlantic on what was built as a passenger ship.  Do you think it was more comfortable than other troop carriers?

Thursday November 15– Major Edward E Hartwick was commander of the First battalion of the 20th engineers.

Next Week: Watching for German Submarines