Background:  A train load of soldiers including my grandfather, John Rodney Jamieson arrived in Washington, D. C. on October 4th, 1917.  They have been staying in tents on the campus of American University ever since.

Sunday Oct 14th, 1917– Spent all day waiting for a little equipment at headquarters.  Spent evening at Y.M.C.A. in Washington

Monday Oct 15th– Everything going well.  Worked in storehouse most of day.  Y.M.C.A. gives farewell reception.  I had to work did not go.

Wednesday Oct 17th-Acting as supply clerk for Hq. co  Still busy am at Washington Y.MCA tonight.  Have had a good bath.

Thursday Oct 18th– Working on supplies today. and late tonight.  This job might be easier.

Friday Oct 19th– Jefferson O. Barracks placed under quarantine for Diphtheria.  Glad I was transferred before.

Saturday Oct 20th– Am getting my job better in hand and straightened out.  Met Roy Thomas today.  He is assigned to Co. F

Monday, Oct. 15– Poppa recorded in his journal that the YMCA gave a farewell reception.  During WWI the YMCA was a different organization than we think of today.  According to The History of the YMCA in WWI the ‘Y’ provided 90% of the welfare services available to the military both at home and overseas.  The Red Cross and USO were not yet the organizations we think of today and when American needed to quickly build an army to fight overseas the YMCA also mobilized.  During the ‘Great War’ 35,000 YMCA volunteers worked to meet the welfare of our forces overseas.  Of the men and women working with the YMCA there were 286 casualties during the war. 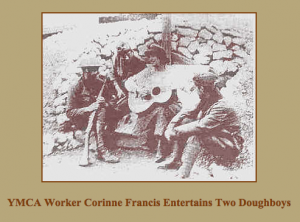 Friday October 19th- Just days after leaving Jefferson Barracks in Missouri. Poppa learned that that camp had been quarantined because of an outbreak of diphtheria.  Diphtheria was a stubborn disease to control and by the 1920s there were between 100,000 and 200,000 cases reported in the US.  Although a vaccine was developed in 1924 thousands of cases were reported in Europe during WWII.  There were zero cases reported in the US in 2015.

Next Week:  Sleeping on a Shelf in the Supply House