Background:  The 20th Engineers including my grandfather, John Rodney Jamieson, travelled across the Atlantic Ocean on the USS Madawaska, They recently docked in St. Nazaire, France.  They are staying in a nearby camp but are now under quarantine.

Sunday Dec 2, 1917– Working in supply room issuing rations.  Would not know it was Sunday.  Another death (no. 2) last night at hospital.

Monday Dec 3–The weather is rather cool but very good.  We sleep on the ground , have very good mess.  Will be glad to be allowed a little freedom.

Tuesday Dec 4– The spirit in this camp is very good considering the quarantine. Another death reported (3).

Thursday Dec 6– We are all getting tired of this quarantine and hope to be able to get out soon.

Friday Dec 7 –Every evening we sing, play cards and have a jolly good time while we are shut in.

Saturday Dec 8–I am still working every day in supply room.  We are getting everything to the companies.

It appears that my grandfather kept count of the soldiers in his unit that passed away by putting a number inside ().  So far he is aware of three. 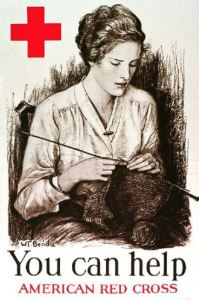 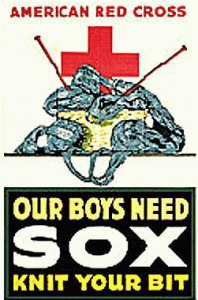 Poppa was complimentary of the Red Cross because the soldiers received “a big shipment of sweaters, etc” on December 5th.

In the summer of 1917 the Read Cross urgently requested knitted goods and hospital supplies and thousands of Americans responded.  The boots worn by the soldiers had seams that tore out easily and metal studs on the bottom so wet and cold feet were a big problem.  The socks knitted by the Red Cross volunteers were highly valued by the soldiers on the front, many of whom were in trenches.

The 20th Engineers are in St. Nazaire, France, getting organized before moving on to their unknown destination.  Edward E. Hartwick was a major in the 20th engineers and my grandfather’s commanding officer.  His biography includes entries in his diary and letters home to his wife.  Here is some of what Major Hartwick wrote after they arrived at St. Nazaire:

This is a very quaint old town (St. Nazaire), most substantially built. As you may imagine, the streets are very narrow, but kept thoroughly clean (only the main streets). Also bought some picture postcards, but the censor regulations will not permit me to send them by mail. I am dictating this while I have a little time after breakfast, waiting for the office of the transportation officer to open, as I want to get an automobile and look over our camp before we go to it.

The sick were taken off the ship yesterday, … Have been unable to get permission to cable and everyone on the ship is very much disappointed that we cannot cable our safe arrival. I find that people here are more in the dark as to news of the war than are the folks at home, as it seems that what news they receive here comes from New York, Washington, London and Paris, and of course it is all censored. At this writing do not know where we are to go, except that we are to go by train; the little dinky cars and engines would certainly make Robert laugh if he could see them. For example, we moved our entire command and baggage on the American train in thirty-six cars, but will have to have seventy-two cars on this French rail road. The locomotive looks like a model of the first engine ever built.

We … are quartered in buildings similar to the buildings at Camp American University, except that there are no floors in the buildings and the men are all sleeping on straw in their bedsocks, spread on the ground. Almost hustled my legs off that day getting rations, fuel and ovens, etc., so the men could have hot coffee and a warm supper. Our lunch we brought with us off the boat. The men were a happy lot, to get their feet on solid ground. Everything is very scarce here and we are striving to economize. I should not say everything, as food seems to be plentiful. But wood, coal, paper, milk and clothing are scarce. We had no heat for warming until today, when I managed to secure one stove for each barracks, heated by a “slack” coal and only heated evenings. We are in quarantine and have most stringent regulations to keep all officers and men in camp, except when I give permission for them to leave on duty — or with me. We are in a camp commanded by an officer of marines — and several other organizations are here. Our sick list is improving and we hope to be out of quarantine by December 10th. Winter weather here; seems to be about like late October in Detroit, only more dampness or fog in the morning.

Based on the journals of both my grandfather and major Hartwick it appears that supplies of most things are in short supply.  The soldiers are sleeping on the ground and can only heat their quarters at night.  The term ‘slack coal’ refers to small pieces of coal or even coal dust.

Poppa reported in his journal that on Sunday, Dec. 2nd he was working in the supply room.  Major Hartwick also made an entry for that day:  Here is some of what he recorded:

Sunday Morning,December 2nd: This is a beautiful Sunday morning and I have come down to the town near the dock, as we have our impedimenta in a warehouse and are moving it by motor trucks, so as to divide it up among the detachments that I am to send to their stations. Our boat is still at the dock unloading cargo, and I took the opportunity to get one more good fresh-water shower bath. Am now writing this in the “salon” of the Hotel Bretagne — a room about ten by fourteen, containing a writing table and piano, which, with a few chairs and fireplace, completely fill it. … It was so cold my toothpaste was frozen or at least so cold it would not squeeze out till I warmed it at the cook-fire. … Last Thursday — Thanksgiving day — Major Greeley arrived at camp and surprised me, as I had talked with him from Paris on the telephone the day before. He is on the staff of the general officer at the head of the forestry department. The general officer was stationed in Detroit a year ago. You have heard me speak of him as my former instructor at West Point, General M. M. Patrick.

He was so glad to learn that these two battalions had arrived that he sent Major Greeley to learn all about us, our equipment, etc. Our army is really in desperate need of lumber, fuel (wood), poles, railroad ties, bridge timber, etc. One campaign here was stopped for lack of certain wooden products. Well, he gave me my orders; so as soon as we are out of quarantine I am to send the various detachments out and will be in charge of a “district” as district commander. We will begin work at once getting out logs, building camps, roads, cutting up the limbs for fuel — even the twigs are saved here. Thanksgiving day was not much of a celebration here.  Worked all day, but that evening was invited to a 7:00 p. m. dinner with Major Greeley and Major Johnson, given by the “casual officers” on board our ship to us and to Captain Watson and Lieutenant McCauley of the navy. We had a good time, but it was a poor substitute for the table with you and the boys. Thanksgiving afternoon our men and officers were addressed briefly by Chaplain Talbott of the 17th Engineers, an Episcopalian. After his talk I took the opportunity to say a few words to our men and for once in my life must have made a good one, as both the officers and men afterwards spoke of it. We are forbidden to talk among ourselves or with civilians as to events of the war, our station, our moves, our numbers, etc., so there is very little I can write about such… Our men are feeling better and we have several ball games every afternoon — baseball and football. The sick are improving, though we lost another soldier last night of pneumonia.

Next week:  Some Soldiers Move Toward the Front