Background:  A train load of soldiers including my grandfather, John Rodney Jamieson arrived in Washington, D. C. on October 4th, 1917.  They have been training, getting equipment and staying in tents on the campus of American University ever since.

Monday Oct 29th– Weather fine.  Not much work to do.  Heavy rain tonight.

Tuesday Oct. 30th– Rain all forenoon.  Drill this P.M. and enjoy it as weather is cool and all are tired of sitting around.

Friday Nov. 2nd– No pay today.  Spent most of the day around the stove.

October 28th – It appears that my grandfather was doing some sightseeing on Sunday and was ‘nearly run over by pres car’.  I assume he means President Woodrow Wilson’s car.

October 31st– Poppa indicated that the Secretary of War Baker visited quarters today. Newton D. Baker served as secretary of war from 1916 until 1921.  Baker, a former mayor of Cleveland Ohio supported Wilson at the 1912 Democratic National Convention.  Supporting a candidate in the election gets you a position in the presidential cabinet later?  Things haven’t changed.

Prohibition– Poppa indicated that no passes were allowed on the night of October 31st because ‘city went dry this day’.  Prohibition was implemented as a result of the 18th amendment which didn’t pass until 1919.  However, state governments were encouraged to implement their own laws outlawing alcohol prior to the amendment passing.  Washington, D.C, was not a state and was governed by Congress.  So Congress decided that the city would be dry choosing November, 1st 1917 as the day that alcohol became illegal.  In D.C. alone almost 300 barrooms were closed and 2500 bartenders lost their jobs in the process.  Confining soldiers to camp on October 31st was likely the prudent thing to do.  Imagine if the soldiers were allowed to patronize those barrooms on the last day that alcohol was legal!

Thursday, November 1st–  Based on his journal entries it appears that living at Camp American University was routine and sometimes boring.  However ,overseas things were getting deadly serious for America. 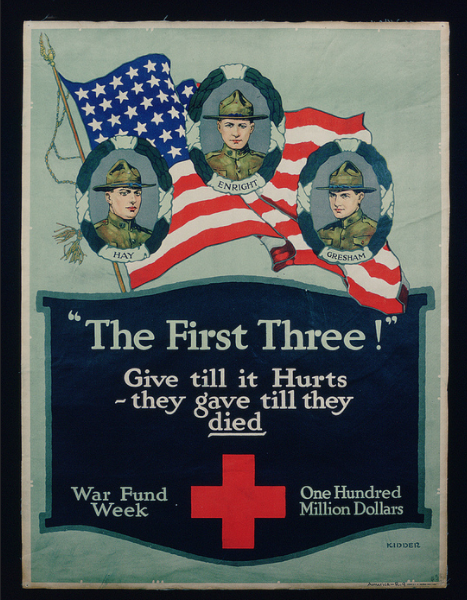 On November 1st the first three American soldiers were killed as a result of WWI combat.  Members of the 1st Division, they were:  James Gresham, Merle D. Hay and Thomas F. Enright

Saturday, November 3rd– Poppa indicated that he was entertained at the home of Mrs. Wickersham.  He doesn’t say who she is but it is interesting to speculate.  Mrs. Mildred Wickersham was the wife of George Wickersham who was the attorney general of the United States under President Taft until 1912.  They had a son who served as a US solider in WWI.  According to the book The Five Towns Mrs. WIckersham was an avid gardener who was known for her gracious entertaining and often opened their gardens to visitors.   Is it possible that they also entertained soldiers who were in Washington, D.C.?  Or, maybe, a different Mrs. Wickersham operated another type of house that provided ‘entertainment’ to soldiers?

Next Week: Ready to go to War