Background:  The 20th Engineers including my grandfather, John Rodney Jamieson, are training in anticipation of being sent overseas to participate in World War I.  Having arrived in Washington, D. C. on October 4th, 1917,  they have been training, getting equipped and staying in tents on the campus of American University.

Monday Nov. 5th– Pay day.  Everybody is happy as nearly everyone is broke.  Camp is guarded tonight no one leaves.

Tuesday Nov. 6th– Looks as though we will leave before long now.

Wednesday Nov. 7th– Weather is fine.  Nothing special doing.  No one allowed passes.

Thursday Nov. 8th– All supplies are packed and loaded.  A sure “go” this time.

Saturday Nov. 10th – In full marching order.  We were reviewed by War Dept. in front of War building.  Trip about ten miles everyone stiff & tired. (Note- according to google maps it is 4.9 miles from American University to 1650 Pennsylvania Ave.)

Here is a picture of the 20th Engineers on the campus of American University taken in October, 1917.  Presumably, my grandfather is in this picture somewhere.

Sunday November 4th–  Poppa wrote that he spend the  P.M. at Keith’s Vaudeville.  B. F. Keith opened a Vaudeville theatre in 1913 on the corner of 15th and G in Washington.  Keith was known as the ‘King of Vaudeville because he had 30 theaters and was worth $50 million.  According to the publication Vaudeville and Other High Drama at 15th and G, Keith’s Theatre was only a block from the White House and President Wilson rarely missed a Saturday night show there.

This theatre was about 4 miles from The American University where the soldiers stayed.  Did they walk to the theatre or was there some other form of transportation?

Friday November 9th– Poppa indicated that both battalions were inspected.  According to a website  “...the 20th Engineers was the largest regiment ever to exist in the United States Army. formed in 1917 it grew to over 500 officers and 30,000 soldiers by Armistice Day in 1918. The organization included 14 battalions deployed to France, with another 14 battalions and additional company-sized units attached, and 15 more battalions still organizing in the United States. Its missions were among the most diverse of the American Expeditionary Forces, from operating within direct combat range of German forces, to units scattered along the Spanish border; its soldiers were among the first to arrive in France, and among the last to return home. The primary function of the 20th Engineers was forestry–to produce lumber and timber for Allied forces–but its flexibility and command structure allowed for a wide range of other engineer missions.”  Although the organization grew to 14 battalions by the end of WWI my grandfather was in the First or Second battalion.  The first battalion, originally authorized to be 600 men strong grew to 800.  The article didn’t report the size of the second battalion.

The 20th engineers spent September and October of 1917 training in military things such as close order drill, interior guard, and physical exercise. However, the same article noted that none of the recruits was trained in the forestry skills that were to be central to their unit’s functioning because they were assumed to have brought these  skills from civilian life.  My grandfather fit the bill since he came from a lumbering family.

Here is a picture to document the event! Poppa must be in there somewhere.

The War Building  is located across the street from the White House in Washington, D.C.but is now called the Eisenhower Executive Office Building and houses a majority of offices for White House staff. It was originally built for the State, War and Navy Departments between 1871 and 1888. 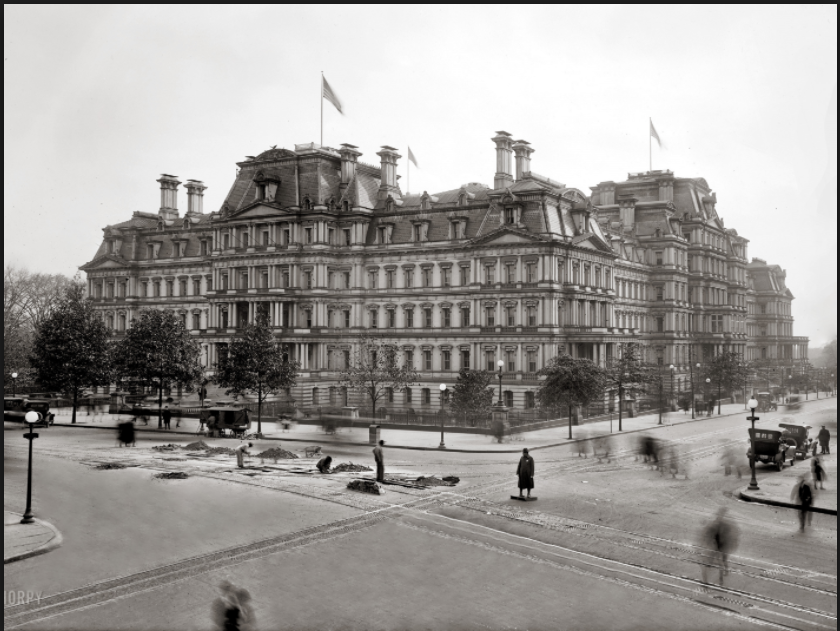 The war building must also be in the same neighborhood as the other building Poppa visited this week; Keith’s Vaudeville.

Next Week:  Leaving on the Q.T. for an unknown location