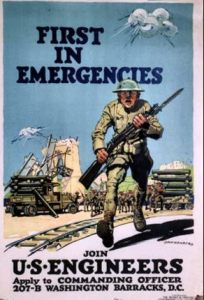 At the time it was called the great war or the war to end all wars.  Today we know it as World War I.  It started on June 28, 1914 when  the Archduke Franz Ferdinand of Austria and Sophie, Duchess of Hohenberg were assassinated.

Under the administration of president Woodrow Wilson America resisted entering the  war until April 6, 1917 when Congress declared war on Germany and  joined allies Britain, France and Russia in the war.

Young men signed up for the armed forces in record numbers for patriotic reasons or because they were lured by the adventure of war.  My grandfather was one of them.

John Rodney Jamieson was a young man with a degree in engineering from the University of Wisconsin in 1917 when he made the decision to join the United States army.  He would serve for three years in the  20th Engineers regiment of the US army.  He kept a record of his experiences.  He wrote a sentence or 2 nearly everyday in a pocket calendar.

It has been a century since my grandfather Rodney made the decision to go to war for America.  This is intended to be an account based on his journal of  experiences published exactly 100 years after he wrote of them.

5 Replies to “My Grandfather’s World War I Diary”